Suddenly - 1954 - Lewis Allen
Frank Sinatra wanted to kill the president in 1956, no wonder his was picked to be The Manchurian Candidate.

I Died a Thousand Times - 1955 - Stuart Heisler
Jack Palence is no Humphrey Bogart and all the CinemaScope and colour in the world cannot make up the difference.

The Harder They Fall - 1956 - Mark Robson
Boxing sure was crooked back in the 50's, glad it's not like that anymore.

While th City Sleeps - 1956 - Fritz Lang
A serial killing is targeting young women and it's up to a top reporter to used his girlfriend as bait.

The Blue Gardenia - 1953 - Fritz Lang
Feeding a woman drinks and trying to force yourself on her is a bad idea and for Harry Prebble it ended in murder. 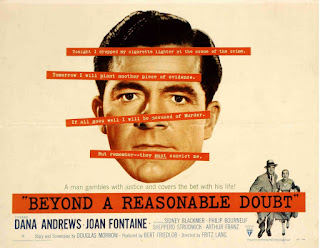